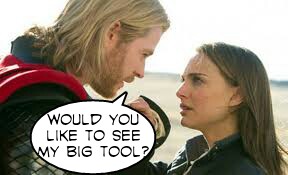 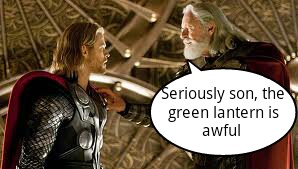 Thor is the latest in the line of marvel superheroes to make it to the big screen and he might just be the silliest one yet.

The film tells the tale of the viking thunder god Thor (Chris Hemsworth) who annoys his dad, Odin (Anthony Hopkins), gets stripped of his powers and banished from the viking homeworld of Asgard to Earth. Seems harsh, has Odin never heard of the naughty step? Our hero must cast aside his immaturity and become a man. It’s your classic puberty metaphor but with a huge hairy viking god and not a spotty teen and it makes for a great movie.

Making a film set on two very different worlds was always going to be a challenge in terms of tone but director Kenneth Branagh gets the mix about right. The scenes in Asgard are played straight and somehow avoid being silly. This is partly due to the stunning art design of Thor’s homeworld which manages to be ancient, hi-tech and beautiful all at once. Compare it to that vomit inducing place the green lantern skulked around and its obvious where you’d rather visit.  The scenes on earth as Thor struggles to fit in are played for laughs and are very funny and sweet.

The other main challenge was to endear the title character to the viewer. Thor was always in danger of being an annoying brat that audiences couldn’t stand but Hemsworth makes him charming with the right blend of arrogance and naivety to avoid this. For an ex Home and Away actor this is quite an achievement. Donald Fisher would be proud.

Its obvious Marvel studios are positioning this as a setup for the avengers film but you get the feeling Branagh doesn’t care about all that. Instead he’s made a fun action movie that stands on its own. It may struggle at times to decide whether its a Shakespearean epic or a camp comicbook romp but this actually works in its favour as the film never takes itself too seriously while never descending into a throwaway Captain America style farce.

That’s not to say Thor isn’t without flaws. The main story is extremely flimsy with bad guys that I could probably defeat after a couple of pints and the human characters are woefully underdeveloped. We don’t actually get enough time with them as the plot zips back and forth between Earth and Asgard. The main thrust of this story is the hero’s journey from an arrogant manchild to a noble warrior. Classic stuff and something we can all get behind but with so much going on Thor accomplishes this transformation in about two days. Even Home and Away would have handled this more subtely.

Also I suspect Branagh was leaned on to include a lot of scenes which are basically setting up the avengers movie (we get a brief glimpse of Jeremy Renner as Hawkeye) but these detract from Thor’s tale.

In the end what stops Thor from being an essential marvel movie is that our hero spends the majority of the movie with no powers and no hammer (or Moljnir for my fellow geeks out there) leaving him mostly a big blonde buffoon with daddy issues. There is a distinct lack of Viking god ass-kicking and the direction of the few action scenes is a bit flat.

For all my misgivings I still recommend Thor. It’s funny, lovely to look at, with a charming lead actor and a light touch from the director. Its more in the vein of the first Iron Man film than other Marvel movies and Branagh and Hemsworth should be applauded for making one of comic’s silliest characters a likeable, believable person who just happens to be the god of thunder. With a more coherent story and without the influence of the Avengers film sticking its nose in every two seconds it could have been a classic comic book movie. Instead we get the perfect film to watch when you’re hammered (hammer jokes are harder than they look!). Kenneth Branagh has really nailed it (that was better!)