The Worst Irish accents in film ever!

Apparently it’s St Patrick’s day today, a day where people all over the world celebrate the man who introduced Christianity to Ireland.  Paddy is famous for two things, 1. Driving all the snakes out of Ireland and 2. Introducing the religion that tore the country apart for the next 1600 years.  Maybe it’s time we give the snakes another chance, they couldn’t make things any worse.  I digress, this is a movie blog so to mark the day I’ve created another pointless list of obscure and sometimes interesting trivia for you to disagree with.  Today it’s the worst Irish accents in cinema history.  Remember I’m Irish so I get final say.

The little seen thriller starring Bruce Willis as a top assassin is only remembered by me for the beautiful butchering of the Irish accent by Mr Gere.  He plays an ex IRA terrorist who presumably planted a bomb under his accent coach’s car.  In one scene he sounds welsh, in the next its Japanese, this performance is the benchmark for all bad Irish accents to match.

Another ex IRA member (they really do appear to have a problem with staff retention), Jones could easily be playing an Al Qaeda terrorist instead and no one would know. Sounding like a South African who moved to Texas when he was 9 this is a beautiful example of an actor who found out his character was Irish the day before shooting. Thankfully Jones stuck to his own accent for the rest of his career.

Where to start with this one? Diaz’s preparation consisted of ‘dye hair red, talk quickly’. Definitely a graduate of the ‘Tom Cruise in Far and Away‘ school of Irish accent, this one is more annoying than funny. Even Richard Gere would shake his head at it. 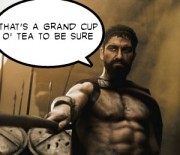 Director: ‘OK Gerard, the book says the guy is Irish but no one will care if you just make him Scottish.’
GB: ‘I think I can pull this off, how hard can it be? I managed a faithful ancient Spartan accent in 300 so this should be easy.’

Note to Scottish actors attempting Irish accents, take a leaf out of Sean Connery‘s book from The Untouchables, say you’re Irish but don’t even attempt an accent. Here endeth the lesson.

So what do you think? Do you know any Irish accents that are worse? Or should that be ‘oirish’? Pierce Brosnan doesn’t count as he achieves an awful irish accent while actually being Irish. Bring it on!