Yep it’s time for a new pointless feature.  Today we begin a look at cliches you’ll often see in films.  Now we all know the obvious ones  such as the oddly placed cat jumping out scare or the cliche of any film featuring Jennifer Anniston being terrible but what about the ones that Hollywood slips past us over and over and that when looked at seem extremely stupid.  Well I’m here to expose these starting today!

As seen in: Juno, Knocked Up, Fast Five

Yeah you’ve seen it.  Female character pukes in toilet.  What could be wrong?  Has she got food poisoning?  Flu?  Stomach bug?  Of course not stupid!  She’s with child!  Now, I’ve barfed a number of times in my short years on this planet and only twice has it been because I was knocked up.  Hollywood would have us believe that no one vomits for any of the other million reasons that nature intends. 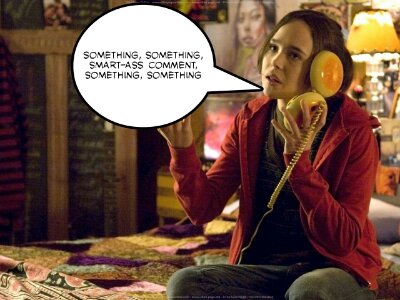 So why is this cliche (or trope if you’re young and hip) so common?  Well this is a simple way for films to introduce a concept across multiple movies without having to go into more depth or have to come out and explain what’s going on.  Its basically cinematic shorthand and could be seen as either lazy or efficient depending on how much you’re exposed to it. I’ve done some research and apparently women don’t always suffer from sickness during pregnancy but in films this will always happen. Usually in the presence of someone else who’ll automatically pull that ‘Jenny doesn’t usually throw up when we’re at the library’ face. Just once it would be nice to hear a female character barf and say ‘ewww I just ate 2 kilos of Haribo Tangfastics and basically puked syrup.’

You’re not doing it right Exorcist makers, in movies we’re not supposed to see the vomit. I know the character has something living inside her, and I know its the ancient Babylonian demon Pazuzu, but isn’t all this a bit much. It’s not cute and it’s in quite bad taste. What? She’s not supposed to be pregnant! It’s not a rom-com? I really should watch it again.

So are you pregnant? How often do you vomit? Actually ignore that, my lawyers are telling me its beyond the remit of a movie blog. OK, just tell me any other film cliches we could add to the list.