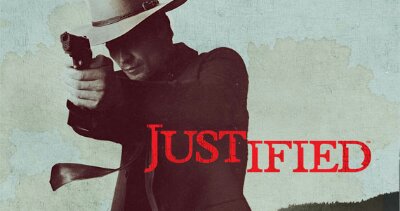 You’re right, I do introduce a lot of new features that don’t seem to have followups.  Well screw you, hypothetical reader!  It’s a relatively new blog and I’m in it for the long run so there will be followups in future if you keep reading.  I digress, here’s a new feature!

The new feature is Television Corner and basically I tell you about a TV show I’m currently watching.  If you need anymore explanation than that then I don’t think you should be allowed to use the internet.  Now, I don’t watch a lot of TV, it’s mostly movies (hence the blog) so when I do watch a show it’s usually via Netflix or a box set. That means this feature will be pretty sporadic so when it does show up its generally for a TV show I like.

I’ve written so much crap already the actual meat of this post will be shorter than the intro. So to sum it up, I’ve been watching Justified and it’s really good. It stars Timothy Olyphant (from the amazing Deadwood and also the bad guy in Die Hard 4) plays a US state marshall plying his trade in rural Kentucky. I’m Irish so I had no idea what a US state marshall is and only knew Kentucky through it’s delicious fried chicken however these facts didn’t stop me enjoying the show. It’s based on an Elmore Leonard short story so you know it has a very clever script that you’d love to quote at work but don’t have the style to pull off.

To me it’s a throwback to late 80s cop shows like Hill Street Blues or even Columbo where the tone is quite light and is built around humour, and Justified does this very well. Olyphant is excellent, playing the main character in an understated laid-back way, always with a sardonic phrase, carrying off the swagger in a likeable fashion. He’s also the only man on screen who can carry off wearing a stetson while he goes about his daily business, something I sadly attempted before being beaten badly by local thugs.

I’ll shut up now, those thugs I mentioned are still chasing me so I’m in a hurry. It’s a fun show, nothing too heavy, has the beautifully named Walton Goggins in it, and has hillbillies committing crimes. What’s not to like.  Ah shit!  They’ve found me!

Have you got any TV recommendations. Let me know in that comments section below. Thanks in advance!