Then again it might be crap.  Today Microsoft announced at the unveiling of the new XBox (strangely named the XBox One) that Steven Spielberg is developing a TV series of hit videogame Halo.  We all know that videogame movies are routinely horrible (as seen here) but Halo might actually achieve the unthinkable – it might not be shit. Halo tells the story of a massive war between earth and a race of religious fundamentalist aliens known as the covenenant.  You play a super-soldier called Master Chief (no really, that’s his name) as you run around shooting extraterrestrials with colourful guns.  So far so familiar.  What sets Halo apart though is its epic scale and the universe it takes place in.  There are tonnes of stories waiting told within the saga.  Where it might fall down is when it comes to characters. Think of a normal human.  Now take away their personality.  OK, now make them walk and look like constipated action figure.  There’s the problem. 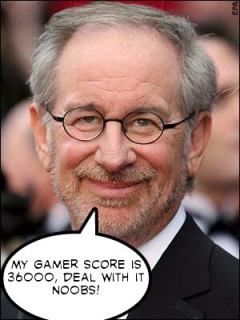 This isn’t the first time someone has tried to bring the game to our screens.  Neill Blomkamp was lined up to direct a big screen version but the project fell through.  Luckily for us Blomkamp went on to direct District 9 instead.  So am I excited about a Halo TV show?  Actually yes, with Spielberg involved it could be an intergalactic Band of Brothers but with more spaceships and sexy AI programmes.

What do you folks think?  Looking forward to Halo: The TV Show?  let me know below.