Get ready to be transported into the future friends!  Those amazing gadgets and doohickies you see in films are already here and ready to be played with.  You just have to promise me one thing.  Promise you will only use them for good, I can’t specify that enough.  You can thank me later when I’m speeding past you on a hoverboard lightsabering the shit out of everything in sight. 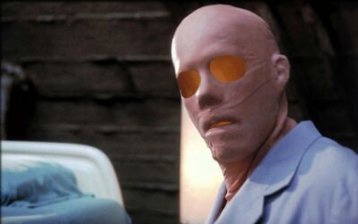 As (not) seen in: Loads of stuff

What would you do if you could be invisible? Actually don’t answer that. Creep. Harry Potter used his cloak to sneak around school, the Predator used it’s camo to hunt Arnie in the jungle, and Kevin Bacon used it to perve on women in Hollow Man. But it’s just sci-fi isn’t? Well no. Look at this video which is part of a Mercedes advert, they make the car invisible using the same technology used by Bond in Die Another Day. Their next project involves bedding hot Russian spies while drinking champagne. 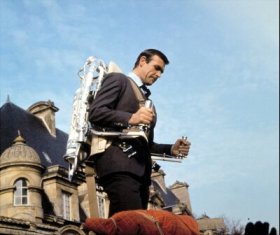 As seen in: The Rocketeer, Thunderball

You know you want one. The ability to fly to the shop, buy 20 cigarettes and a red bull and fly home in a couple of minutes. Maybe I’m not being ambitious enough here but I’m tired and thirsty right now. Jetpack research was carried out by the US military in the 60s until they realised how stupid it was. That hasn’t stopped backyard enthusiasts from trying to build their own unstoppable deathtraps which usually display the elegance of a hippo falling down a flight of stairs. But not all jetpacks are created by idiots – this is a professional defence company prototype that actually looks quite cool: 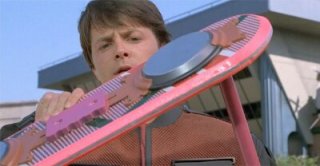 As seen in: Back to the Future Part 2

Don’t get too excited, it’s a bit shit. Basically an artist has used magnetics and other physics based hocus pocus to create a working hover board. The only problem? It doesn’t work if you stand on it. I know Michael J. Fox is quite small but even he couldn’t get this thing to stay in the air.

As seen in: Star Wars

The one you’ve been waiting for. There isn’t anyone who grew up watching Star Wars who hasn’t wanted a fully working lightsaber. Imagine choosing your own colour, powering up that bad boy and cutting off the arm of that guy at work that keeps stealing your milk? Who would have guessed that a nerd with too much time on their hands would come closest to creating the real thing? As you can see from the video it’s made of a stupidly powerful battery and a laser and is perfect for any situation where a cardboard stormtrooper stands perfectly still while you shine it right at him. I always prefer a good blaster by my side.

What movie gadget would you like to own? And please don’t say the one from the ‘lust’ murder in Se7en or I might have to report you to the appropriate authority. Let me know in the comments below.