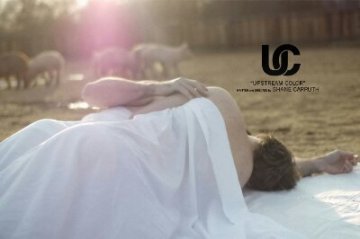 I could attempt to explain what Upstream Color is about but I’m not entirely sure I know myself.  It could be about how we treat animals, it could be a film about the human experience post the millennium, or it could just be about how pigs see the world.  Again it’s probably nothing to do with these ideas.

Upstream Color is written and directed by Shane Carruth (he also acts in it) the guy who produced brain pummeling time travel flick Primer.  And if you had a hard time following the intricacies of that then UC will leave you totally bewildered.

It starts with a man harvesting some kind of maggot from a strange plant.  He then goes on to implant it in an unwitting woman who he then commands using some form of hypnotic suggestion.  These commands mainly involve knitting, playing board games, and transcribing a book.  Its after this that things become truly weird.

It won’t be for everyone, there isn’t much dialogue, scenes are jumbled, and there are lots of quick cuts.  There is always the danger that the entire film will collapse into a confusing mess and at times it does but not for long.  It’s to Carruth’s credit that there’s always a beautiful shot or an intriguing piece of dialogue to keep you watching.  What’s the connection to the pigs?  Why do the man and woman share memories?  What is the significance of the colour blue?

Typical of this type of film, these questions are never really answered.  But that’s OK.  The answers would probably detract from the whole.  It’s all about your own perception and whether you like looking at pigs for long stretches.  Which by the way I do.  Many will hate the film or become bored.  And at times these bouts of boredom can be justified.  Take for example a side story about a couple who don’t seem to get along, it doesn’t add anything to the movie but it only lasts five minutes.

If it sounds like something you would like then give it a go.  But don’t be expecting to have any great insight by the end of it.  If you get nothing from it in the cinema you’ll still have an opinion after when discussing it with others.  Upstream Color is a strange, dreamlike, confusing ninety minutes but when it all came together at the end I realised that I quite enjoyed it.