I have a confession to make – I’ve seen all of the Resident Evil movies and *whisper* I kind of enjoy them.  That’s why when i saw this film was on Netflix and I was bored i thought ‘why not?’.  They’re awful I know but maybe this review of Resident Evil: Afterlife can show you how certain shades of shit can be enjoyable.

If you haven’t seen one before I’ll get you up to speed.  The Umbrella Corporation created a virus that turns people into zombies, they overrun the world and one of the survivors is Alice played by Milla Jovovich.  That’s about it.  This is the third one and it begins like this:

The credits start and it’s not long for the film to have the bare faced balls to say ‘based on the videogame Resident Evil’.  The first few games are great by the way so this statement is blasphemous on many levels.

We see the villain of the piece – Wesker.  Coincidentally the guy playing him has less facial emotions than the 16 bit videogame character he’s based on.

Cut to the lobby scene in The Matrix but with more ridiculous action except set in the real world.  Somehow Milla manages to throw out an earth-shattering shockwave and kill about a thousand people.  Then she gets shot.  The end.

Guess what?  It turns out there are loads of clones of her which is kind of a slap in the face for people who followed previous films. Its like the shit Ripley from Alien Resurrection times a hundred.

Somehow 16bit man gets away in a helicopter probably due to the fact he’s made of only a hundred polygons which must make him lighter on his feet.

But hold on an effing minute, who’s this slinking up behind him?  It’s only Milla, but the real Milla, which we can tell from her more casual haircut.  Wesker presses forward, forward and x to use his special punch on her and injects her with something.  Fans will know that throughout the series she gets injected with various shit by the bad guys which makes her stronger in someway.  You can see how this could be counterproductive for them.  Try injecting the common cold or some other virus  instead of super serum next time.

All of this happens in the first fifteen minutes, it really is that kind of film. This is the point at which the movie really starts and somehow get stupider.

I should note that Milla acts as if she’s in a much better film than this but for some reason the director (who she’s actually married to) never let’s her know this.  Presumably her wedding vows included the line ‘Do you, hot Ukrainian model and actress, promise to act in an increasingly more stupid and overly complicated series of films loosely based on a popular game and created by your husband?’. Didn’t you see me up there banging on the glass begging you to say no?  Milla? 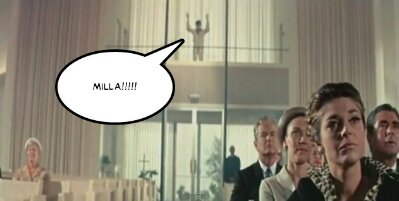 Anyway, Milla finds out that everyone is legging it to a modern day Noah’s Ark called the Arcadia so she attempts to get there. This leads her to a prison and a motley crew of stereotypes survivors including an ex basketball player, a sleazy movie producer (I wonder if he can be trusted?) and in a totally out there piece of casting – Wentworth Miller from Prison Break as a, wait for it, prisoner who wants to break out.

I’d be lying if I said that a lot of it wasn’t enjoyable, there’s a cool fight with a big bastard with an axe, zombie dogs, and Milla kicking lots of rotten ass.  Holy shit, I think I might be starting to like it.  It’s so fucking stupid but is played dead straight and personally I think that’s the cherry on the shit-pie. I’m getting tired of tongue in cheek, sets out to be bad, winking at the audience movies.  Resident Evil: Afterlife, on the other hand, is honest, naive, brightly coloured, ambitious crap. To paraphrase a character from an actual good movie – It’s the shit we need, not the shit we deserve.

What’s your guilty pleasure movies? Twilight? The Human Centipede? Krull? The films of Martin Lawrence? Let me know in the comments.