Guess who hasn’t seen the new Robocop movie yet?! Yes, good guess! Hopefully a review of it will come soon so instead i’ve got something even better for you – Robocop: The Animated Series. Who says Screenkicker isn’t up to date?

Robocop: TAS was a spinoff from the hyper violent social satire movie of the same name. This was in 1988 when you got a cartoon version of all the most violent adults only movies of the day. There were animated adaptations of Rambo, Police Academy, and I Spit on your Grave (only two of these actually exist). Those were the good old days when cartoons were for cool kids and not sappy wimps who talked about their feelings and other shit like that. I’m sounding really old aren’t I?

So on to the actual review. Don’t laugh but this version of Robocop is pretty faithful to the source material. A lot more than the blasphemy that was Robocop 3. The title sequence alone is stupendous. We see Alex Murphy getting murdered by Clarence Boddicker’s crew and then being rebuilt as Robocop. Well we don’t see him being blown limb from limb like in the Paul Verhoeven classic but it’s insinuated.

After this the first episode starts with a generic street gang robbing a blood bank for reasons that are undisclosed. Robo and Officer Lewis show up, beat the bad guys, and stop a bomb from killing the public. But as we see later the higher ups are pissed off that Murphy broke an expensive window and pledge to shut the Robocop program down. Nnnooooo!!!! 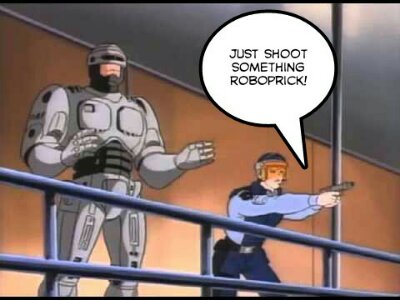 From here things get crazy. An obviously half robotic evil doctor hires a group of thugs known as The Vandals to er, vandalise stuff and discredit Robocop. Throw in the classic ‘angry back lieutenant’, a bad cop named ‘Hedgecock’ who utters the immortal line “don’t get cute with me you walking tin can!”, Lewis screaming “MURPHYYY!!!” constantly, and the bloodcurdling sight of Robocop smiling and you have a classic 80s cartoon show.

You can watch the whole thing on YouTube. It only ran for one season that included the KKK, Hedgecock getting a robot suit (presumably becoming Robocock), and the return of Clarence Boddicker. Enjoy!!!?

What’s your favourite childhood animated series? Mine was the excellent ‘Defenders of the Earth‘. This can also become a competition to see who is the oldest fart among my readership. Let battle commence!