Here’s my entry in Hard Ticket to Home Videos ‘You Dumb Kids’ week. This involves confessing to the stupid assumptions about movies you had as a child. Enjoy! 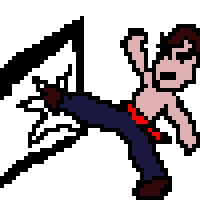 I know that ‘You dumb kids’ is about the silly things you thought about movies as a child. However I’d like to introduce a twist to this concept. This tale features a man in his thirties who might be the dumbest kid ever. Let me explain.

I was talking to a friend about my favourite films. The conversation went like this:

Him: “Is that the one where he fights the robot?”

Him: “Yeah he fights a big Russian robot.”

Him: “There’s a bit in the film where someone says ‘he’s a machine!’ and he’s always connected up to wires and shit.”

There you have it, a grown man who thinks that Ivan Drago was an android due to one throwaway line that’s obviously not supposed to be taken literally. I…