Finally a chance for me to use some of the French I learned at school, as it’s my pleasure to introduce a review of French Canadian film Omertà. It’s brought to you by the amazing Kim from her Tranquil Dreams blog. It’s the place to go for fitness, films, and fancy cakes (I enjoy two of these things and hate the other, guess which!). Bonjour Kim, j’adore le review. That’s all the French I can remember at the minute. Merde!

Ex-cop Pierre Gauthier (Michel Côté), currently head of a private security agency called Pulsar International, is hired by his former boss Gilbert Tanguay to investigate an early released 2nd degree murder/psychopath, Sam Cohen (Stéphane Rousseau).  For this, Pierre hires ex-Canada Secret Service, Sophie Della Costa (Rachelle Lefevre) to go undercover in the restaurant owned by Steve Bélanger (Patrick Huard), a big shot who deals with Montreal’s italian mafia.  While their investigation, they learn that something bigger is brewing relating to the fabrication of counterfeiting gold bars and swapping them with the Canadian and US reserves.

I have a love-hate relationship with Montreal movies.  The best example is an earlier movie by the director who did this one, Luc Dionne.  He made a movie called Aurore. I own it but I know I will NEVER watch it again.  Because it was frustrating, depressing and dramatic.  It almost never ends well.  This is my first time watching a suspense thriller from Montreal and one thats had a lot of hype because Luc Dionne also was the director and writer for the TV series that lasted three seasons (and I haven’t seen either).  He should stick with this 🙂

Omertà is packed with some of the best actors (in my opinion) in the Quebec industry.  Patrick Huard, playing Steve Belanger, is my favorite actor of the Quebec movie industry and although I have to catch up with his movies, he was the one that gave this the needed element and intensity to keep me guessing.  Plus, he had some pretty sarcastic dialogue that made me laugh.  The man has his rugged charm also and he is a great actor, oh and I love his Quebec accent when he talks.

Another one that was quite good but probably not his best and from the original series is Michel Côté (who I review in another movie My Daughter My Angel).  However, his character Pierre Gauthier had a lot of good confrontations and dialogue with Patrick Huard’s Steve Belanger that brought up the intensity of the movie as it progressed deeper into the investigation.

Another big name (according to my boyfriend) is Stephane Rousseau who is a comedian and actor.  I’m not so familiar with his work but he plays Sam Cohen.  This guy can definitely do the nice, sleek bad boy and then turn around to be bat shit crazy psychopath.  Honestly, he was the one that surprised me the most.  Every movie has one of these discoveries and mine was him 🙂 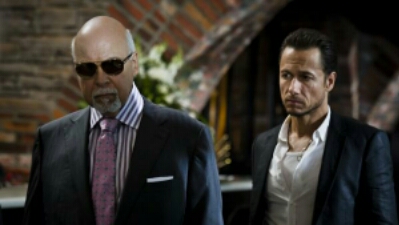 The familiar faces you will see is our undercover ex-Secret Service played by Rachelle Lefevre.  She was in a awesome horror thriller that I reviewed last year called The Caller and more recently, Julia in Under the Dome.  This is definitely NOT her best work and I don’t know, the character of Sophie at times turned me off. I think I need to watch the series to get a better idea of how her character is actually supposed to be. She did a lot of meaningless swearing and weird English inserts in between her French that seemed a bit unnecessary and overly emphasizing that she was really tough (which I already would know without her doing that).

Another one you might have heard of is René Angelil.  And you definitely know his wife, Celine Dion 😉 His role was the Italian mafia boss Dominic Fagazi.  I’m not exactly sure what his real voice is but he sounded a lot like he was trying to impersonate Michael Corleone in The Godfather.  I don’t have a problem with it but he had one solemn look throughout the whole movie but then, I’m guessing he was doing the poker face so that no one would know what he was thinking.

Overall, Omerta has a solid thriller and a good pace that builds up on intensity as the characters go deeper into the investigation.  It works effectively and we get to know the characters a little bit more and sometimes even question their true intentions.  Its packed with very good actors that carry out their roles perfectly except for a few little details.  Its definitely worth your time if you are interested in French Canadian productions.  After this movie, I went out and bought the complete series and will start watching it soon.  Just to show you that I was quite impressed! 🙂

Thanks to Mikey for having me as part of his Screenkicker Olympis Blogathon! It was a lot of fun! 🙂

Thanks for a brilliant review Kim, and it’s great to have someone representing Canada in a non-ice hockey or crack smoking mayoral capacity. Coincidentally come back tomorrow readers to vote on the greatest living Canadian actor. Sorry Zoë but Hayden Christensen will NOT be featured.