After a short break due to the technical limitations of being in the sticks for a few days the Screenkicker Olympics is back! And today it’s the turn of the land of musicals about men on farms singing and (insert another thing Oklahoma is famous for) – Oklahoma! Read on for a fascinating piece from someone who knows so much about tornados you get dizzy looking at her, but that’s mainly due to whatever she’s slipped into your drink. It’s The Critical Cinephile with a frontline opinion on the movie Twister. Visit her site for excellent reviews and essays on a huge range of movies.

A big thanks to Screenkicker for giving me the opportunity to participate in my very first blogathon, alongside some truly talented bloggers. I apologize for the length of the post, but you should expect nothing less from a boastful American! So let’s get to it.

Twister: An Okie Separates Fact from Fiction – The Critical Cinephile

I am an Okie. But unlike the classic Merle Haggard song that popularized the term, I am not from Muskogee; in fact, I’ve never even been there. The term “Okie” refers to anyone who calls the state of Oklahoma home. Which I do. More specifically, I hang my hat in Oklahoma City (OKC to locals and basketball fans). And, to avoid making things way too easy for my multitude of fans and stalkers (I just know they’re out there somewhere), that’s about as specific as I’ll get. 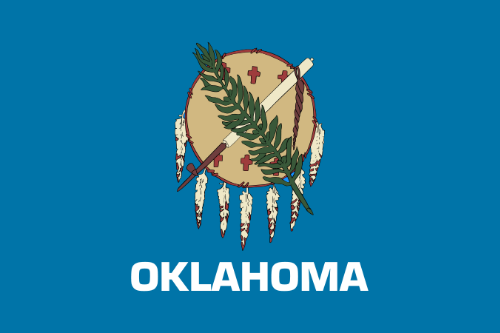 From 1967 to 1988, the motto on Oklahoma’s vehicle license plates read, “Oklahoma is OK”, which is the equivalent of saying, “Oklahoma is meh”. Clearly in the past we had some serious self-esteem issues; and several well publicized tragedies over the last few years didn’t do much to bolster our confidence. Oklahoma’s limited notoriety has become mostly intertwined with catastrophe; The Post Office Massacre in 1986 that launched the phrase “Going Postal” [there’s something to be proud of]; The Oklahoma City bombing in 1995; and the massive, deadly tornados that struck in 1999, and again last year in May of 2013.

But when it comes to film, Oklahoman’s should hold their heads high. Some excellent films have featured the great state of Oklahoma, including last year’s critically acclaimed, August: Osage County [and please, let me assure you that not all of our families are that bat-crap crazy – I mean, mine is, but I gotta believe there’s some sanity out there somewhere in our state]. Other Oklahoma films of note are, Oklahoma! [that one’s a bit obvious], Far and Away, Near Dark, The Outlaw Josey Wales, The Outsiders, Rumble Fish, Thelma & Louise, True Grit, and Where the Heart Is. Even Raymond Babbitt’s “10 minutes to Wapner” breakdown in the film, Rain Man, forced the brothers to pull over in Hinton, Oklahoma for an impromptu viewing of The People’s Court. So why, out of all of these great Oklahoma films, have I chosen to showcase Twister? Well, since we’ve officially started 2014’s tornado season, it’s all about the weather.

Twister is not a great film. The script is transparent, the performances are subpar (in fact Jamie Gertz won the Golden Raspberry for worst supporting actress), and the most memorable moment involves a CGI cow. But, for a film like this, audiences shouldn’t really hold out a lot of expectations. When you break it down to its bare bones, Twister is really nothing more than a fun and enjoyable monster movie.

The basic plot follows a team of scientists as they are terrorized by an unstoppable force hell bent on destroying America’s heartland. But instead of Godzilla or giant radioactive spiders, Oklahoma’s threat comes in the form of (very real) tornados. But can an industry known for sensationalizing events for the sake of entertainment, give a realistic portrayal of experiencing this kind of terrifying weather event? Well, yes and no. And there’s no one better than an Okie to help you separate fact from fiction.

Weather in Oklahoma is serious business. We do not have “Weather Girls” or “Weather Men”, we have meteorologists; each one of them are highly educated weather aficionados who become local celebrities at near rock star status. The two men seen reporting the weather on television in Twister were actual Oklahoma meteorologists at the time, Rick Mitchell and Gary England (England retired last year and Mitchell left in 2012 for a station in Dallas, Texas).

During the months of April, May, and June, Oklahoman’s remain constantly weather aware. Threats of violent thunder storms and tornado watches are almost a weekly occurrence, and the state’s residents are just as adept at reading a Doppler Radar map as the meteorologists who are paid to do so. When severe weather threatens, Oklahomans take notice. Regular broadcast television is interrupted with a constant barrage of updates and colorful, digital weather maps that are so accurate, they can tell you exactly what time a storm will be arriving on your street.

These broadcasts also feature reports from various storm chasers. Yup, that’s a real thing. Just like in the film, storm chasers are a small group of meteorologists or weather enthusiasts that specifically put themselves in the path of these potentially violent storms in search of the Holy Grail of weather phenomenon, the tornado. You can even go online to any one of our local station’s websites and access a map that shows you exactly where chasers are located and stream their live video feeds.

In Twister our group of chasers encounters five different tornados within a 24 hour period. Most believe that this is a ridiculous Hollywood exaggeration, when in fact it’s quite probable. At the time this film was shot, the most tornados Oklahoma had seen in one day was four. But since the movie’s release, we’ve had two days (June 13th, 1998 and May 31st, 2013) that match the film’s five, and tie for the state’s record of the most tornados recorded in one day. However, the likelihood of this one team happening to encounter each one of the film’s storms is pretty slim. 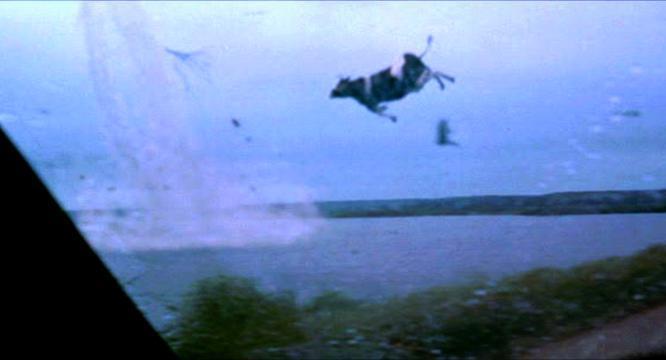 Can a tornado really pick up a cow? Absolutely. After last year’s devastating May 20th tornado, a horse was found on top of a building several blocks away from the field he came from. Don’t worry, he lived.

Can a tornado really pick up a tanker truck? That’s real too. Another 2013 tornado on May 19th crossed heavily traveled Interstate 40 and tossed several semi-trucks off an overpass. Smaller vehicles however, are susceptible even in less intense tornados. Two years ago, Oklahoman’s watched live on television as a tornado hit Interstate 35, picked up a large delivery van and tossed it around like a child’s toy.

In the film the group refers to the elusive F5 tornado. The F-scale represents the Fujita Scale ranking of a tornado’s intensity and therefore its potential for causing damage [it could also refer to the frequency of f-bombs dropped when faced with a potentially deadly tornado]. The scale runs from F0 to F5. An F5 is a rare occurrence with sustained wind speeds over 261 mph. One of the members of the film’s storm chasers calls the F5, “The finger of God”. Since this movie was released, God has given Oklahoma the finger twice with deadly and devastating results.

I have seen firsthand what these violent storms can do, and I can say with certainty that the end of this film is pure hogwash [we say things like “hogwash” in Oklahoma. We also address people in groups as “Ya’ll”, and if you ask someone over the age of 75 for directions, they’ll tell you it’s “Just up yonder”.] There is no way in hell that our two main protagonists would have survived that tornado strapped to a pipe in a well house. If the force of the wind alone didn’t rip them from limb to limb, then the flying debris would have finished the job. 2 X 4 through the neck? Yup, that totally happened during the F5 tornado in May of 1999.

And BTW, tornados don’t growl. I understand the filmmakers wanting to use sound to make the threat seem more animal and menacing (a recording of a camel’s moan was slowed down for the sound of the tornado), but come on, that was a little silly. You want to know what a real tornado sounds like? Go put your face up against a railroad track as a train passes by going 90 mph.

So, obviously this post has done nothing to boost Oklahoma’s 2014 tourism revenue. I’m sure many of you are asking, “Why the hell would you live there?” For Oklahoman’s, weather is just sort-of matter-of-fact; just like Californian’s are unphased by most earthquakes, and Floridian’s barely bat an eye at most hurricanes. The truth is, these natural events (especially the particularly devastating ones) are not as common as you might think. It’s not like every time I step out the door I have to worry about being sucked up into the air. From 1993 to 1997 there were no tornados recorded in the state of Oklahoma. But when they do strike, and when they do destroy, a brilliant example of what it truly means to be an Oklahoman shines through. An Okie’s character is built on their willingness to help and support their neighbors in times of need. It’s in their love of community that makes them get back up, clear away the debris, stand their ground and rebuild. It’s this selflessness and dogged determination that embodies the true spirit of Oklahoma. There’s a saying here, “Our weather is tough, but our people are tougher.”

Written by Michael Crichton (The Great Train Robbery, Jurassic Park) and his wife, Anne-Marie Martin. For the purpose of re-writes during filming, Joss Whedon (Buffy the Vampire Slayer, Toy Story, The Avengers) and Steven Zaillian (Schindler’s List, The Gangs of New York, Moneyball) were brought in as script doctors. My God, the talent! How did this script suck so badly?

The first Hollywood feature film to be release on DVD format.

Filming was briefly halted due to the terrorist bombing of the Alfred P. Murrah Federal Building in downtown Oklahoma City on April 19, 1995. Several members of the crew went to the site to help with recovery efforts.

As Bill and Jo are driving in a ditch trying to get ahead of a storm, a tornado is seen causing damage to a farmhouse in the field beside them. The farmhouse is a real house in Fairfax, Oklahoma, and the damage seen in the film is a CGI effect. However, in 2010 the farmhouse was destroyed by an actual tornado. It’s reported that the real live twister took almost the exact same path as Hollywood’s version in the film.

Does anyone remember that Philip Seymour Hoffman is in this film? He plays a big, lovable goof and totally rocks a University of Oklahoma hat throughout the entire film. Boomer Sooner!

Thanks again to The Critical Cinephile for proving that not all Oklahomans are deranged perverts. I hope y’all enjoyed that post up yonder. I think I would make a great Oki, what do y’all think?