Yeah you heard me! A dude with the big C talking about a film with loads of cancer… victims? Sufferers? Club members? What do you call people like us? I’ll stick with sufferers in lieu of thinking of a better word. I prefer to be referred to as a ‘Third Dan Cancer Fight-Master’ but I’m weird like that. I have Ocular Melanoma which is usually known as eye cancer for those of you who hate syllables. Its incredibly annoying as I have no depth perception and can’t turn left. I’m basically an ugly Derek Zoolander.

Anyway back to the movie. The Fault In Our Stars is a film based on the wildly popular book of the same name by John Green (you can read a review of it here). It tells the story of cancer sufferer Hazel (Shailene Woodley) who is a teenager whose life is empty and she just counts down the days. All of this changes when she attends a cancer support group and meets a hot guy called Augustus (Ansel Elgort) with one leg.

We join them on a journey of dreamy looks at each other, picnics in the park, late night phone calls. Basically actions that should be irritating to the average viewer but somehow it feels OK. Maybe its because these are two kids with real problems, not just that your IPhone broke or a girl told her friends you have a little wiener that looks like a jelly-bean in a fur coat. No, Hazel and Augustus are living with the spectre of death hanging over them. Damn, that got dark fast.

So we have two young lovers who in a rare twist for movies are actually incredibly likeable. You don’t begrudge them the cheesy stuff or the schmaltzy lines, they deserve to experience all of this. Plus they aren’t assholes. And I’ve met my fair share of assholes with cancer. Not actual cancer of the rectum, I mean these people are dicks with cancer. Not actual penis canc… You know what I mean. But I digress, Hazel and Augustus are good people who you can smile at when things are good and squeeze out a tear when events inevitably go south.

As someone in the C-Unit (my new melanoma based hip-hop supergroup) I’ve written before about how films get cancer wrong. A Fault In Our Stars avoids many of these pitfalls such as not having characters that look constantly on the verge of death. Hazel lugs around an oxygen tank and Gus has one leg but its not a big deal to them, and no one focuses on it which is refreshing. Also it doesn’t go down the route of what I call ‘The Cure’ where you either get cured or you die. Hazel has cancer that will never go away but through treatment she manages it, there’s no uplifting scene of her getting ‘The Cure’.

Watching the film was quite hard for me. It hit home the unfairness of it all, these young people who deserve to have long and happy lives but they won’t and the world won’t change when they’re gone. That’s also why the movie works – love is never more vital than when time is short and you have to experience all of it in a short period of time. What do you do? The message of the film is that if you try to make the lives of yourself and the people you care about a little bit better then that’s enough. I’ve devoted my time to making penis jokes on a film blog so maybe I need to rethink some things.

In summary The Fault In Our Stars is a sweet film which is elevated immensely by the captivating Shailene Woodley. She’s fantastic and just makes you like Hazel. It has a nice love story at its heart and it mostly treats cancer with respect (I’ll ignore the ‘comedy blind eye cancer sidekick’). As a Third Dan Cancer Fight-Master I can recommend the film for those who like a romantic flick that you need to take tissues into (no, not that kind of film, Eric).

Thanks for making it this far! Have you seen the film? Did you like it? Have you heard the latest single from C-Unit, its out on our new label Radio Therapy. I shouldn’t write this late at night, I’m getting bullshit overload. 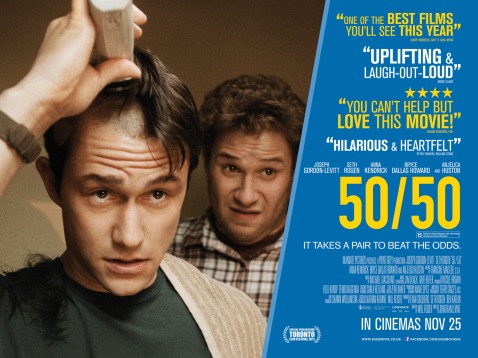