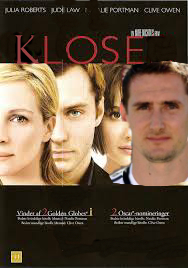 The touching story of German goalpoacher Miroslav Klose who must cope with life with friends who are a bunch of shallow arseholes who swear a lot and try to make it look like they’re in a film rather than a play. Klose must navigate the relationship problems and trying to score a goal for Germany despite being distracted by Natalie Portman stripping. Has already had a sequel ‘Miro Miro’ greenlit in which Klose finds a magic mirror.

“Almost all of this biopic is fictional, pointless” – Die Welt

“A Touching, brutally honest, tale of a man who can’t score a goal from out side the penalty area” – Screenkicker

I’m writing this during the World Cup final. This should give you some indication of how exciting the match is. I want a goal!