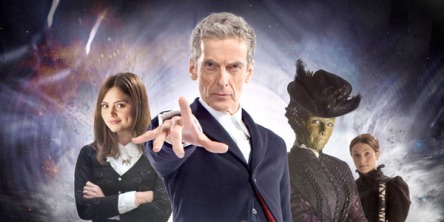 The new series of Doctor Who started tonight with Peter Capaldi stepping into the shoes of everyone’s favourite Timelord. So how was it? As you can tell from the title of this post, the episode was not great. In fact it was pretty poor. However the silver lining here was Capaldi’s Doctor. It’s common for the introduction to a new Doctor to be slightly below par. David Tennant’s first appearance had him sleeping for nearly the whole show and Matt Smith was quite annoying on his debut. We know that both men went on to become beloved versions of the Gallifreyan. Tonight’s episode did nothing to buck the trend of dull opening episodes.

It started off well with a giant dinosaur in Victorian London puking out the TARDIS but from there we saw the most generic Doctor Who show in recent memory. Storywise this abides by the rule ‘when in doubt, evil clockwork robots’. Which no one cares about but this was all about the new Doctor and from the evidence presented this could be a great one. Peter Capaldi gave hints about his portrayal by telling supporting characters to ‘shut up’ repeatedly, retaining his Scottish accent, and being passive aggressive towards companion Clara.

The bright spots in this dreary story were the scenes with the Doctor and Clara with them exchanging sparky banter and displaying a good amount of chemistry. The quality dipped though when Capaldi was off-screen and we were left with the annoying supporting characters of the lizard, the cockney, and Humpty Dumpty. Hopefully when the Doctor and Clara shake these losers we’ll have some excellent Saturday evenings.

Much like the clockwork bad guys you can see the gears clicking into place for another series long arc from wrier Steven Moffat. Hints are dropped about what I think is a link to the Girl in the Fireplace episode but I may be wrong. Also could this Doctor be a ruthless killer? Hopefully the writers have the balls not to wimp out on this and actually follow through with a badass Doctor. Capaldi going all Malcolm Tucker on the Daleks could be the best television ever. We’ll see what happens, but right now I’m really liking this new guy.

What did you think of tonight’s episode? What about Capaldi? Let me know in the comments below!