4 Reasons You Need To Watch House Of Cards – Now!

After a week long break living my natural life of being a fat slob I’m pleased to say that normal service will be resumed soon with the ultimate Guardians of the Galaxy review. Before that though I’ll hand you over to Chris Bridges – Screenkicker’s political correspondent with his views on House of Cards. Over to you Chris!

I have just finished watching House of Cards season 2 – so after resisting the urge to open all my windows and scream ‘HOUSE OF CARDS IS AMAZING!!’, I fired up my laptop and hit reply to the email my editor sent me 3 weeks ago.  The subject line read: you haven’t submitted an article in ages – what the hell have you been doing?

The answer to that is simple: watching House of Cards!

House of cards is a Netflix original drama based on the 1990’s UK show of the same name.  Whereas the original HOC focussed on UK politics and 10 Downing St, the new version ups sticks and heads across the pond to 1600 Pennsylvania Avenue aka The White House.

HOC follows the political career of Frank Underwood (Kevin Spacey) and his wife (Robin Wright) as they attempt to climb the political ladder, desperately seeking power.  This leads me seamlessly onto my first reason ‘Why you should watch House of Cards’:

HOC is chock full of extremely talented actors.  Led by the incredible King Kevin Spacey as the devilishly clever, demonically driven – Frank Underwood.  His southern drawl, immaculate suits and reptilian like stare all culminate to make him one of television’s greatest characters.

Robin Wright plays his Queen – Claire Underwood a modern day Lady Macbeth with even more dairy intolerance (too high brow for Screenkicker?). Robin Wright is wonderfully cold, manipulative and calculating and together they make a terrifically terrifying pair.

Kate Mara plays Zoe Barnes a career driven journalist, not afraid to use every trick in the book to bag a scoop. 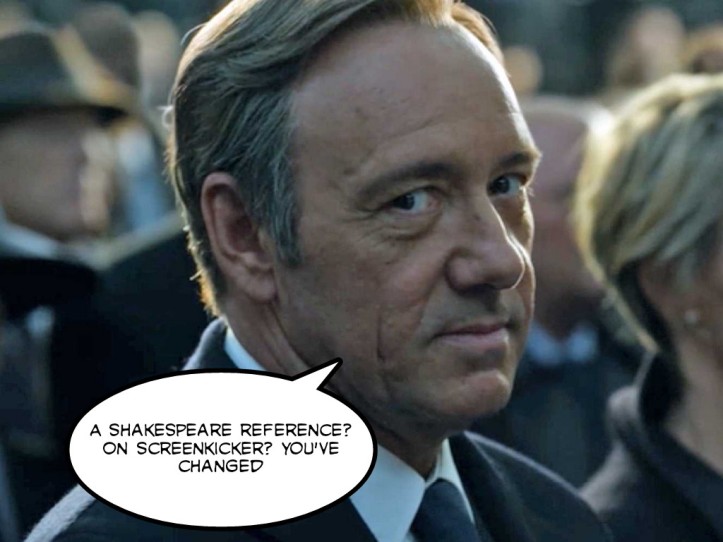 HOC is at its heart a very well written programme with razor-sharp dialogue, dark humour in spades and a labyrinthine plot.  It is a TV show that respects its audience’s intelligence, and makes them work to follow the story.  It is a show that packs a punch and isn’t scared to take risks and tackle tough subjects, as is evidenced by the ease with which it dispenses with main characters and deals with substance abuse, rape, prostitution and abortion.

HOC is dripping with David Fincher’s influence.  Mr Alien 3 Exec Produces the series and directed the opening 2 episodes – his presence is felt throughout. From the moodily lit cinematography, the clever script and characters with questionable and unsavoury motivations; HOC has Fincher’s hand all over it.  Blending the plotting of Zodiac, the sexual undertones of the Girl with the Dragon Tattoo and the darkness of Seven: this is like a David Fincher buffet!

HOC makes repeated, and expert use of this narrative device. The audience are welcomed into the dark and devious mind of Senator Francis Underwood through these short down the lens asides. Much like how an arras is utilised in a Shakespearean tragedy, these private moments allow Underwood to reveal exactly what he is thinking to the audience.  This technique is exceptionally well delivered, providing moments of humour, horror, plot exposition and character motivation all in beautifully scripted wonderfully delivered audience addresses.

House of Cards is an excellent piece of television and is well worth checking out before season 3 arrives in Feb 2015, so join the Netflix club and watch it now – it really is ace!

P.S – Dear readers, please accept my apologies for my excessive and frankly pathetic overuse of puns in this article – I am sure my editor is gonna deck me!