After being nominated by Cara to carry on this blogathon I have to admit that I struggled to decide on who to add to the already amazing list. If you’re not aware of this project then I’ll let the creator Dell On Movies explain the concept –

So without further ado let’s rate some chicks!

Soz Oz fans but i’m going to have to send Dorothy Gale back to Kansas. My reason? I just don’t like her. And I don’t like the movie, it creeps me out too much. Not the flying monkeys, not the witch, no my fear lies with the good guys. The Cowardly Lion, Tin Man, and Scarecrow are pure nightmare fuel so I can’t condone any of their actions. Also Dorothy announces her arrival by straight up murdering a woman with her house and then savagely tracking down her sister and horrifically slaying her. Needless to say, I’m not a friend of Dorothy’s. 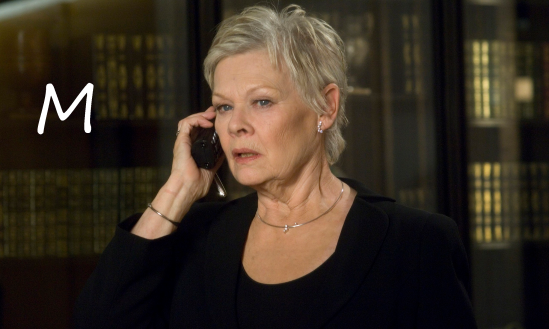 That’s more like it. A true woman in a man’s world Judi Dench’s M goes up against the legendary ladykiller James Bond and kicks his balls. In M’s own words in her first appearance in Goldeneye

“….I think you’re a sexist, misogynist dinosaur. A relic of the Cold War, whose boyish charms, though wasted on me, obviously appealed to that young woman I sent out to evaluate you.”

You go girl! M is the kick up the ass the James Bond franchise needed at a time when it seemed irrelevant. MI6 was a real boys club until she showed up to shake up the status quo. This had the effect of calling out 007’s outdated ways and also show that a strong woman would earn his respect without any romantic attachment. There’s a reason Judi Dench’s M was the only character to make it over intact between the Brosnan and Craig era’s. British Intelligence won’t be the same without her.

I nominate my good friend Table9Mutant to peruse the list on one condition: No awful Molly Ringwald characters please. I look forward to your decision!