It’s now just over a week since the release of Chris Nolan’s massive sci-fi epic Interstellar and after talking to other people who have seen it some questions have presented themselves. Allan at Movie Review World wrote an amazing post explaining the time travel and relativity equations in detail. It really is a fantastic summary of the science of the movie. But what about the big mysteries that science can’t explain? Let’s ask the Brain Gremlin!

Yes this actually happened. Tom played by Casey Affleck did actually name his child Cooper. He did this in tribute to his absent father somehow forgetting that his own surname was Cooper. The reason – Tom is an idiot. His father left him at the age of eight meaning he was educated by an increasingly senile John Lithgow. Somehow his sister Murph inherited all of the brains and looks. Man United fans will know this isn’t the sole incident of this idiotic practice as the father of Phil and Gary Neville is named Neville Neville. However his family don’t have the excuse of the mental toll of the end of the world. 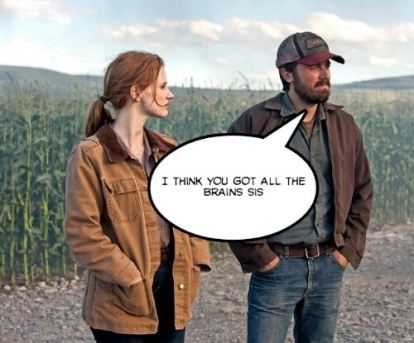 Why was Dr. Mann such an asshole?

Viewers were left scratching their heads over why Dr Mann would try to kill everyone just to steal a ship to escape the planet. Why wouldn’t Dr Mann (Matt Damon) just go along with the crew who were planning on bringing him back. The simple answer – Matt Damon is a dick. The scene where he beats the crap out of Cooper was entirely improvised by Damon due to a longstanding hatred of McConaughey ever since Matthew stole the award winning lead role in The Wedding Planner from him. Damon’s character was originally going to leave with the crew and portray a wisecracking comedy sidekick changing the entire mood of the piece.

How did Michael Caine’s character age so well?

Caine’s character Professor Brand already looked ancient at the start of the film yet didn’t look much different 23 years later. How the hell did this happen? Well deleted scenes from the film show that the big equation that Brand hadn’t finished was actually keeping him alive. It was supposed to be a homage to The Picture Of Dorian Gray but Nolan decided that it would seem too silly in a serious film about a man falling into a black hole/little girl’s bookcase. This is why when Jessica Chastain finally solves the equation Caine immediately dies.

Was that Topher Grace in Interstellar?

Do you have any burning questions for the Brain Gremlin. Let me know in the comments below or send your questions to michael@screenkickermovies.com