The newly formed Screenkicker Geek Brigade™ is preparing for 2015’s various comic-cons. Here’s Screenkicker Head of Video Chris Bridges with a little appetizer to get you in a geeky mood:

April is a month crammed full of very important dates. April Fools day, end of the UK Tax Year, Buddah’s birthday and even St George’s Day (which is also the title of a Craig Fairbrass starring masterpiece).  But none of these dates are nearly as important as the 11th and 12th – the weekend of the EDINBURGH COMIC CON!

Last year the 3 Screenkicker musketeers headed there and had a jolly good time. We drank beer, chin-wagged with Red Leader from Star Wars and we even managed to insult super hot actress Nathalie Cox.

Check out our antics in the video below:

Our tickets for this year’s con have just arrived in the post. A big thank you to all the Edinburgh Comic Con organisers. 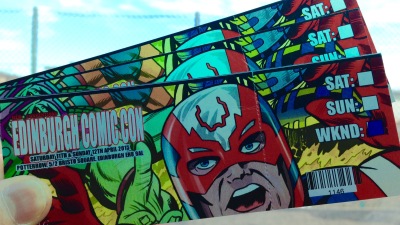 It’s a great day out, but don’t take our word for it – head along yourself. Check out http://www.heroconventions.com for tickets and details.

Hopefully we’ll see you there!