The reputation of action comedy films is possibly at its nadir this decade with rubbish like the Ride Along series and Sandra Bullock turkey The Heat. So who better to bust in and attempt to show them how its done than the man who perfected and popularized the buddy-cop genre? That man is Shane Black, who at the age of 24 sold his script for Lethal Weapon and revolutionized this type of movie. He went on to write under-appreciated classics like The Last Boy Scout and The Long Kiss Goodnight, before taking a break and coming back to make his directing debut with Kiss Kiss Bang Bang, the movie that resurrected Robert Downey Jr.’s career. He followed this with Iron Man 3 (which I LOVED). He’s also famous to action fans as Hawkins in politician birthing classic Predator.

It’s important to know about the writer and director of The Nice Guys because this is his movie. It has all off the classic touches that he’s famous for. Swearing, check. Violence, check. Two mismatched partners, check. Precocious but likable kid, check. Set at Christmas, ch- actually you’ll have to wait and see. The main Blackian (dibs on that word!) trope has always been witty, smutty, breezy, chat between his film characters and The Nice Guys certainly delivers. Nearly every character is quick with a one-liner or funny quip in a way that never makes them annoying. Other writers who produce ‘witty banter’ fall into the trap of making their characters unbearable snarky pricks (looking at you Joss Whedon) but Black just makes it endearing and funny.

The other aspect that helps sell such intricate comedy dialogue is the excellence of all the actors involved. Ryan Reynolds is Holland March, a goofy, single-father, private investigator, who cons old people out of their money without ever solving a case. Russell Crowe is Jackson Healy a classic tough guy, thug for hire, who delivers beatdowns for money. As you’ll probably guess, the pair are thrown together when they discover they’re both looking for the same girl. Action and comedy ensue as they’re caught up in a larger conspiracy involved killer bees, dead pornstars, and environmental protestors. All set during the disco era of the 1970s.

Gosling shows he has an incredible gift for comedy, both physically and verbally as his character Holland clumsily attempts to get through life and raise his daughter. He is in fact a terrible father always leaving his thirteen year old daughter alone for long periods of time. I must how amazing Holland’s daughter Holly, as she is played perfectly by young Australian actress Angourie Rice (even though her name sound like something the Hulk would have for lunch) . Everytime she’s on screen she injects a youthful energy and more than matches her powerhouse co-stars. Lastly there’s Russel Crowe another Australian from down under’s brilliant performers and beautiful people factory. Crowe is perfectly cast as the tough guy who wants to actually make a difference in some way. You believe he’s a hard man who could really fuck you up so it’s amazing when he shows his gentle and funny side, bouncing off Gosling and Rice. I’d love to start a petition to get Russell Crowe to do more comedies.

The Nice Guys is a very funny film. Never quite as smart or violent as previous Black movies but still a refreshing change from Kevin Hart screaming, or Melissa McCarthy cursing and falling over. Despite being set in the 70s, The Nice Guys feels like a throwback to the action films I grew up with in the late 80s/early 90s which made me like it even more. There’s a side plot involving some half-hearted satire on the government and the economy but you can just ignore that and enjoy Gosling and Crowe bickering, brawling, and bonding, in an extraordinary amusing fashion as they stumble through comically violent situations.

The Nice Guys is released in the UK on the 3rd of June and it’s really worth going to see. If you like it have a look for some of the other films Shane Black has written. Have you got a favourite? 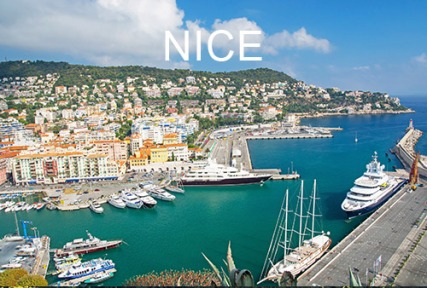 *I once had a very bad experience in Nice but that’s a story for another day.