The Walking Dead – Why do I keep watching it? No really, why?

I know I’ve said previously that there are too many zombie related things in popular culture but I’m still partial to some undead cannibalistic corpses from time to time. So that’s why I started watching the TV show ‘The Walking Dead’.

However tonight I realised something as I sat watching the most recent episode of the 4th season of the show – The Walking Dead is really crap. And not in a poor quality, cheap, badly acted way. No I mean it’s crap in a ‘nothing ever f**king happens’ way. Tonight’s episode featured all of the thrills of watching some people we’ve never seen on the show die slowly from the flu.

So when did it start becoming bad? The sad truth is that it’s been rubbish for years and I’ve kept watching it hoping the next episode will be better. The reason I have this hope is because of the concept of The Walking Dead – a TV series set in a zombie ravages world where we follow a group of survivors trying to make a life.

This is surely an open goal excitement wise, in fact it would take more effort to make the show boring than to produce something gripping. Somehow though the producers have managed this. Which brings us to what’s so bad about it. 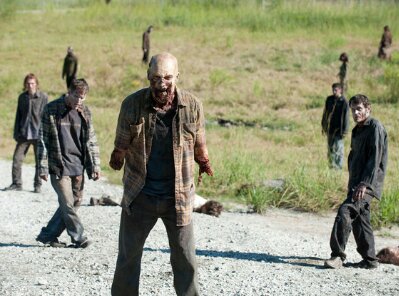 The characters are dull, annoying, depressing two dimensional puppets who do the stupidest things imaginable. You spend most of your time shouting at the screen as the survivors behave in the most unrealistic manner. Nothing ever happens apart from short bursts at the beginning and the end of a season tricking you into believing that this time will be different. And when it does descend into incessant talking the script is lousy. It lacks any kind of humour or pathos leaving you not caring about any of the bland characters.

This has turned into a rant and you’re probably wondering why I’ve kept watching it. The reason I have is also the reason I’m so pissed off – it’s because it has the potential to be excellent. Instead the producers slap the audience in the face with this shit. They seem to believe that people will keep watching without the makers putting any effort into making it good. This might work for awhile but inevitably viewers will grow impatient and turn off in droves.

My message to the producers is – shake up the show, make it exciting, actually spend some money on it, and show us some zombies. Oh and please make the characters leave that f**king prison!

Can you relate to my righteous anger? Maybe you don’t agree with me and have a different view. Let me know in the comments below. You can also follow me on Twitter as @metalmike25