9 reasons you should watch District 9 immediately

This week sees the UK release of Elysium, starring Matt Damon and Jodie Foster. It’s also the second feature film directed by Neil Blomkamp the creator of the excellent District 9. I could start this piece with a list of elements that make District 9 great but I’m too accomplished a writer to fall back on lazy, ah f**k it, that’s exactly what I’ll do. Here’s nine things that make it a fantastic film:

9. The Plot
It’s about Aliens coming to Johannesburg and being segregated from the general population. South Africa? Segregation? I smell a political allegory! And I smell cat food too but that’s another issue.

It starts off like an episode of the office with cameras following the lead character Wiikus as he goes about his job of handing out eviction notices to aliens that are being relocated. This pulls you right in an establishes a reality to the world

7. The Effects
District 9 isn’t an expensive film but the special effects are breathtaking. They aren’t showy like other big budget sci-fis. The effects are subtle and used to further the plot not to distract you from the story 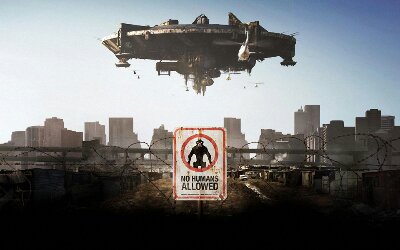 It’s director Neil Blomkamp’s first film and is annoyingly impressive. Being South African he’s produced a flick that is close to him and you can see this connection throughout the movie.

5. The Characters
As the film progresses it becomes a kind of buddy movie like if Murtaugh from lethal weapon was a seven foot tall extraterrestrial called Christopher. The relationship between Wiikus and Christopher is lovely to behold and you root for them the whole time.

Just watch the film, the robot rules and has convinced me to try and live for as long as possible in that hope that someone finally builds one. I’m serious, I’m cryogenically freezing myself as I type this.

3. Alien Guns
I’m not a supporter of firearms but even I would give my right arm to get my hand on one of these babies. Looking like something from a Half-Life game and firing like a giant space cow kicking a planet in the balls, these weapons rule.

Or ‘Prawns’ as they are derisively called by humans are a work of art in themselves. There’s no sappy attempt by the makers to make them cuddly or loveable, these are complex, living, breathing, cat food addicts that you really don’t want to fuck with.

1. The Film
I’ve listed my favourite parts of the movie but none of this would matter if the film didn’t work as a whole. Well thankfully it does. It’s a genre straddling, visually stunning, refreshing, unexpected modern sci-fi classic. So there you have it, nine reasons to track down an devour District 9. Curl up on the sofa with a bowl of fookin’ prawns and enjoy!