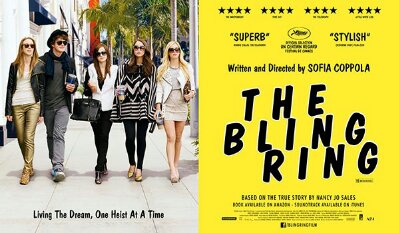 I learned one thing from watching The Bling Ring – celebrities are really easy to burgle.  Apparently they don’t lock their doors, they advertise when they’re out of town, and they don’t miss their stuff.  There in lies the problem with the movie – you learn nothing other than this.

The Bling Ring tells the true story of a gang of L.A rich kids who start to rob the homes of the rich and famous (and Rachel Bilson).  They don’t do this out of necessity but just to own some of their idols’ belongings.  It’s a pretty interesting story that director Sofia Coppola doesn’t explore in an interesting way.

The pattern the running time takes is as follows:

1. Boy thief looks up Google for celebs away from home
2. Gang goes to empty house and steal handbags/money/watches
3. They walk straight out with the booty
4. Repeat this on next celebrity

Basically that’s all that happens until their inevitable capture.  These are one dimensional characters stealing things they don’t need and the film somehow manages to be as shallow as them.  Why do they feel the need to rob them?  Who is really in charge?  What are the repercussions of this crime spree?

These questions don’t get answered with the little brats not changing in any way at all.  Coppola is only interested in showing the crimes and lifestyles of the little shits and spends no time fleshing out the characters. They are acted pretty well, including a scarily natural performance by Emma Watson as a materialistic air-head. However the acting isn’t enough to save The Bling Ring from being an empty exercise in style over substance which is ironic considering the subject matter.