3D or not 3D – Confessions of a cinema cyclops

Now let my clarify.  I’m not a cyclops in the sense that I stomp around trying to eat Greeks (I prefer Estonians), nor does it mean I’m a boring mutant who fires directed plasma blasts from their eyes.  No the very boring reality is that I’m blind in my left eye (people blind in their right eyes are losers, am I right?!).  Some of the world’s greatest people are monocular, Snake Plisskin, Nick Fury, the governor from The Walking Dead.  OK I’ll admit I don’t know any real life people but then I don’t actually know many people in real life.  So what’s this article about? 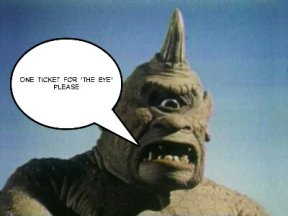 The truth is I can’t see films in 3D .( that’s me doing a sad face with one eye.  3D sends a different image to each eye which the brain puts together to create the illusion of three dimensions on screen.  My shitty ‘good’ eye can’t handle this.  On top of this if I went to see a 3D movie I would still have to wear the stupid glasses just to watch it with throwing up.  ‘Deal with it Mike’ I can hear you mutter and I largely have.  I hear lots of folks slagging off 3D and saying its a fad but the truth is I would love 3D.  I wouldn’t want it to fail but I’ve now been driven to a place where I hope it dies.

The reason I hate it now has nothing to do with being jealous of binocular people or that I’m waiting for the 3D version of Showgirls.  The problem is that I live in a city with one IMAX screen.  I can’t get enough of IMAX when it comes to big action movies so imagine my delight when I saw that Iron Man 3 was on Edinburgh’s only IMAX.  So I went to the website and attempted to book my tickets when I saw the phrase that inspired this rant – IMAX 3D.  I’ll be honest, my jaw dropped and my monocle fell into my champagne glass.  I have a monocle, not because I’m posh, but because its cheaper than a whole pair of glasses.  Anyway that part is a lie but my point stands – show w the film in either IMAX or 3D please.  Think about us monocular film fans who have to watch the movie on a tiny screen crying single tears into our popcorn.

All I’m asking is for cinemas to spare a thought for us, I don’t want any special treatment, just a 2D IMAX screening.  And some beer.  And a shoulder massage.  And maybe Scarlett Johansson to come too.  But please don’t talk during the trailers Scarlett.  I thought I asked you not to do that Scarlett?  OK that’s it, put your clothes back on and get out, I want to concentrate on this trailer for Jason Statham’s new movie.

What were we talking about again?  Oh yeah, 2D IMAX option now.  What do my loyal readers think?  Get to the comments immediately, I’ve got my eye on you!